Our final day in LA saw us being tourists along Venice Beach. The weather was perfect and we all enjoyed the sights that the area has to offer. We bumped in to Georgie’s family and they joined us strolling along the boardwalk. There was some star spotting – Bono. Unfortunately we missed Arnie. He apparently cycled passed us but we were oblivious.

We then drove to Santa Monica and bid a farewell to Georgie as she joined her family on their holiday in the US. Some spent their remaining time on Santa Monica Pier, some hit the sand for Beach Volleyball and others did some more shopping.

We then headed back to LAX to board a Virgin Australia flight home.

Thursday saw the departure of Geraldine from the group. She rose early to be picked up by her family and holiday over Christmas in New York. The rest of us spent our morning at a shopping mall picking up last minute gifts and necessities. We then had lunch at In-N-Out Burger eating delicious hamburgers before heading to UCLA. We were fortunate to be offered a tour of the Pauley Pavillion – home of the UCLA Bruins. 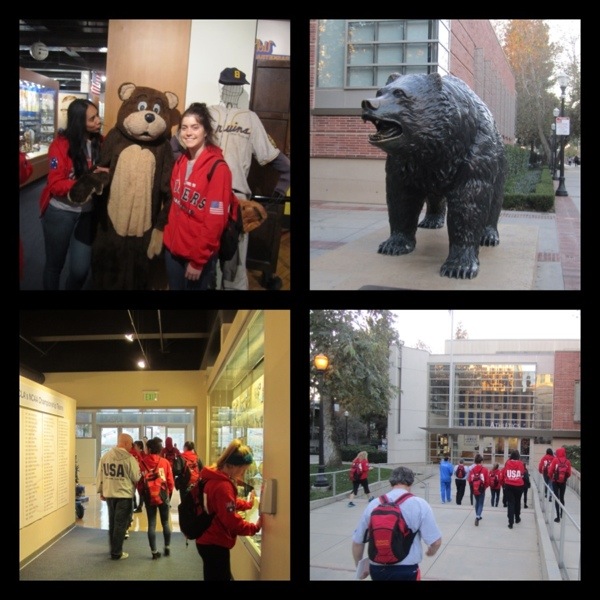 After shopping in the UCLA bookstore for some merchandise we then watched the women’s basketball NCAA game – UCLA Bruins against Cal State Northridge Matadors. Northridge won 77 to 72.

After the game we headed back to our rooms to pack and weigh luggage.

We spent Wednesday December 19 at Six Flags Magic Mountain a theme park full of roller coasters and rides. The girls went on almost every roller coaster and thrill ride. Some had their moments where their bodies just needed a rest but everyone enjoyed themselves. One or two even managed to enjoy the views in between screaming or laughing on the rides.

After a full day at the park we headed to the Staples Center to watch the Los Angeles Clippers play against the New Orleans Hornets. The Clippers won 93 to 77 giving them an impressive eleven wins in a row. The highlight for a few of our girls was spotting a Kardashian in the crowd.

On Tuesday we went shopping at the Citadel Outlets. Knowing that their luggage allowance was now increased, the girls shopped hard. Later that day we headed to Hollywood where we strolled along the Walk of Fame and photographed various brass stars embedded in the sidewalk. Some of the roaming beggars proved a little difficult at times but we learnt to ‘keep walking’. 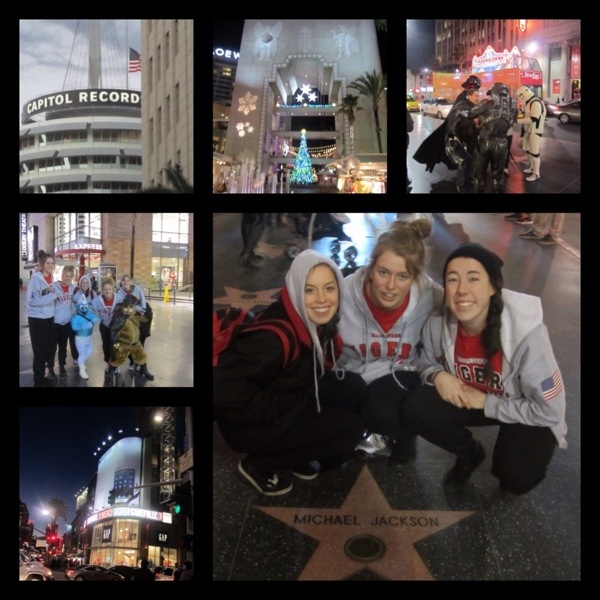 We then headed to the Hard Rock Cafe on Hollywood Boulevard for dinner. 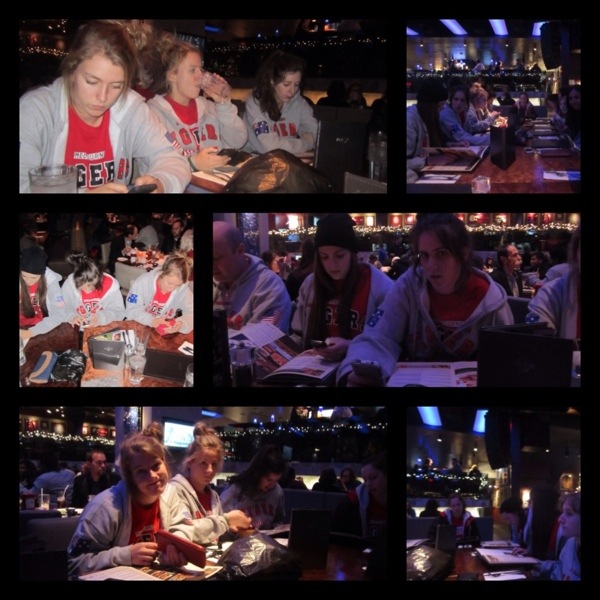 We arrived in Los Angeles well after dark on Sunday December 16 but everyone was super keen for an early start the next day. Monday was Disneyland.
“The Happiest Place on Earth” requires nothing more than photos. 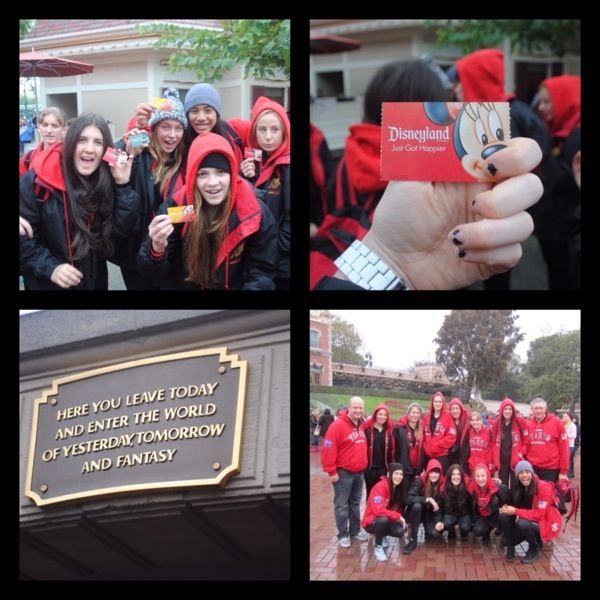 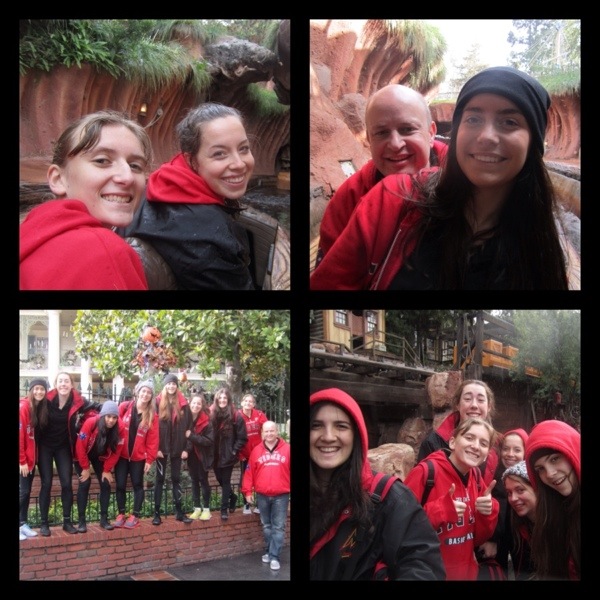 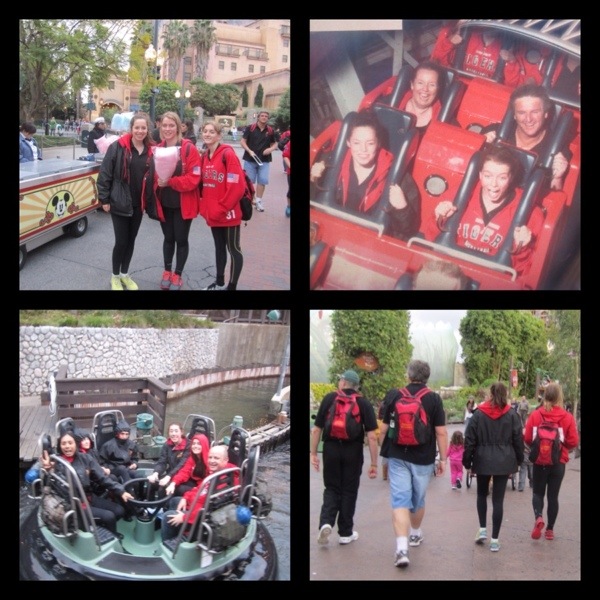 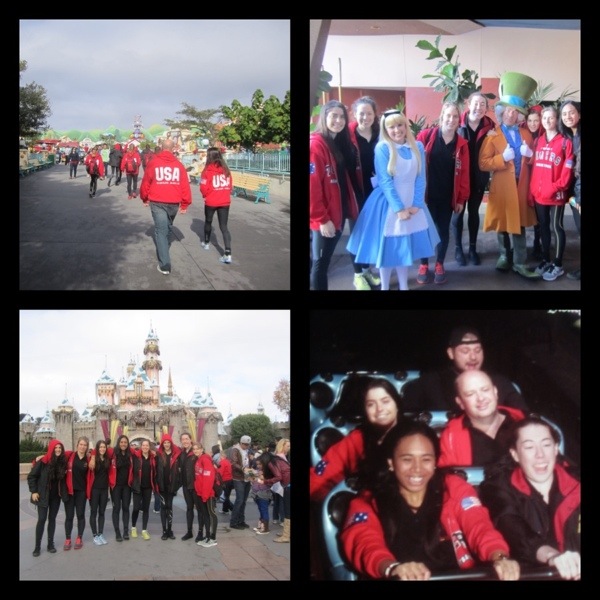 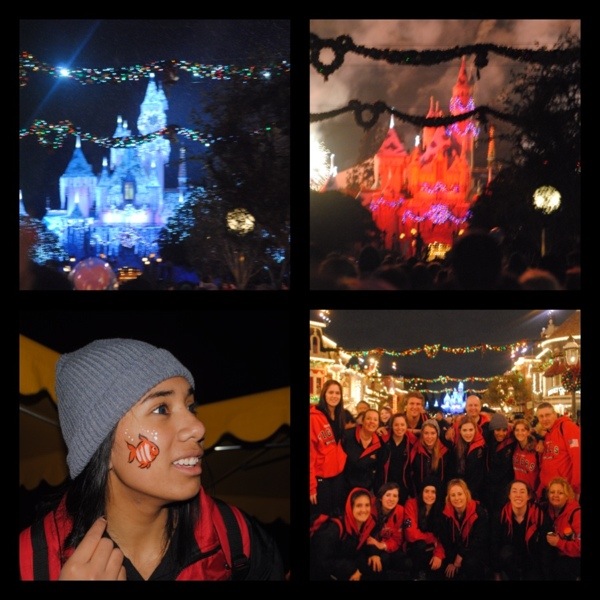 Last game in the USA

Saturday morning we headed to Skyline High School and joined their basketball girls in a fundraising Shoot-a-thon. It was a great time for our girls to mingle with the Skyline girls. The Shoot-a-thon was divided into rounds of foul shots, three point shots and then the big half court shots. Geraldine did us all proud with two spectacular goals from the half court line.

We then shared a delicious lunch with the Skyline team at Cucina Cucina.

That night the girls had a thrilling game against Skyline. With 13 seconds until full time, the scores were level. Matt called a time-out, told the girls what he wanted and they went back in to play. The set play was fumbled slightly but a goal was scored just before the buzzer. An exciting win – 53 to 55.

That night we had our final home stay for the tour. From all accounts everyone had a lovely time with the Skyline families. Once again we were humbled by the generosity and hospitality of new friends in the basketball community.
We all met the next day at the school and loaded the vans in the chilly morning air.

And we were then off to Sea-Tac Airport for a flight to LAX.

Just some random photos of the team out and about. Apologies for some blurry snaps but they captured the moment. 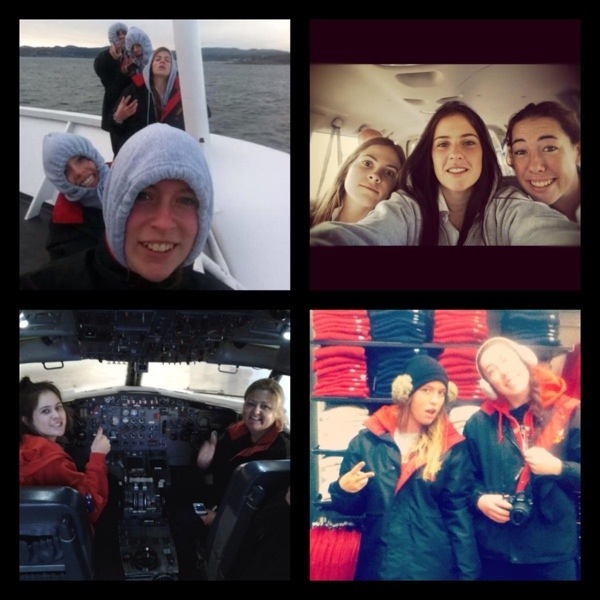 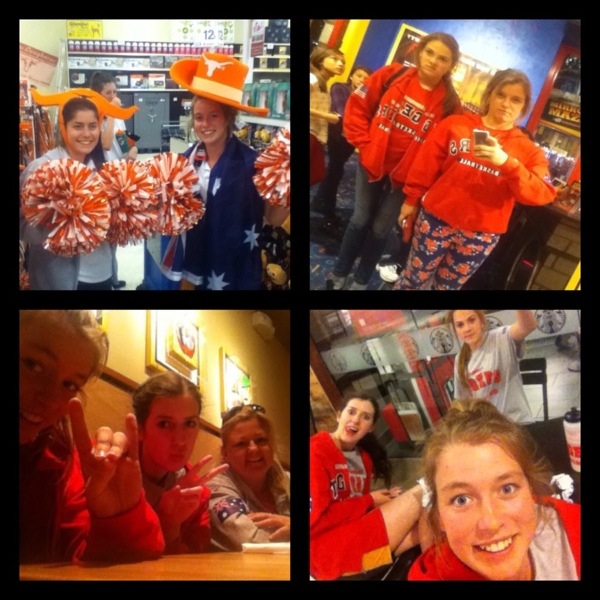 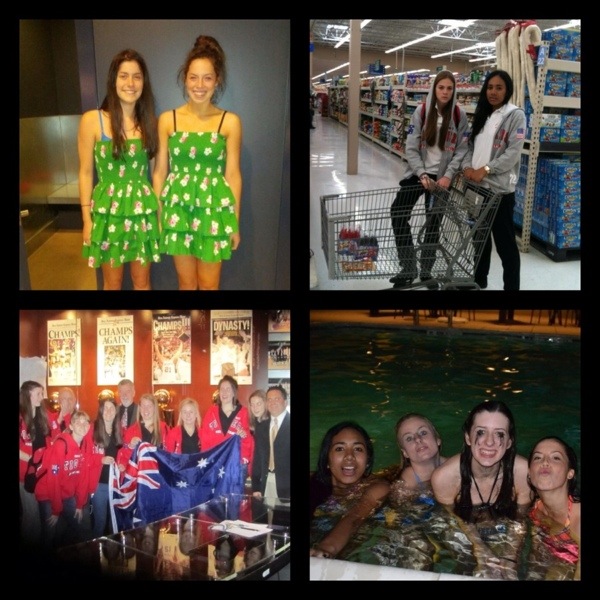 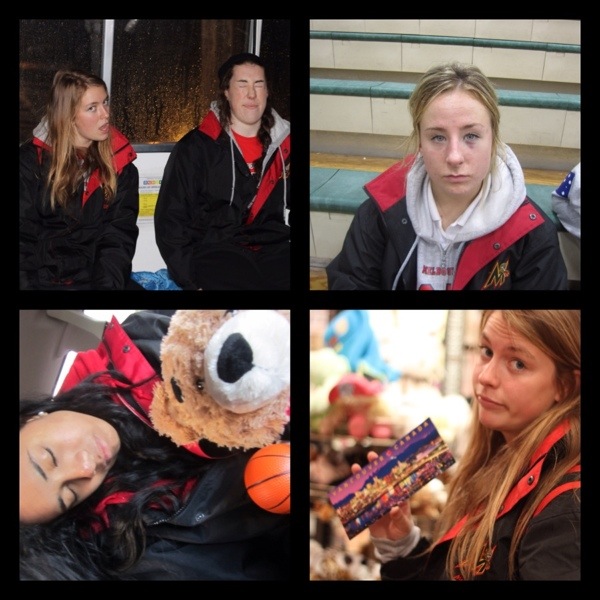 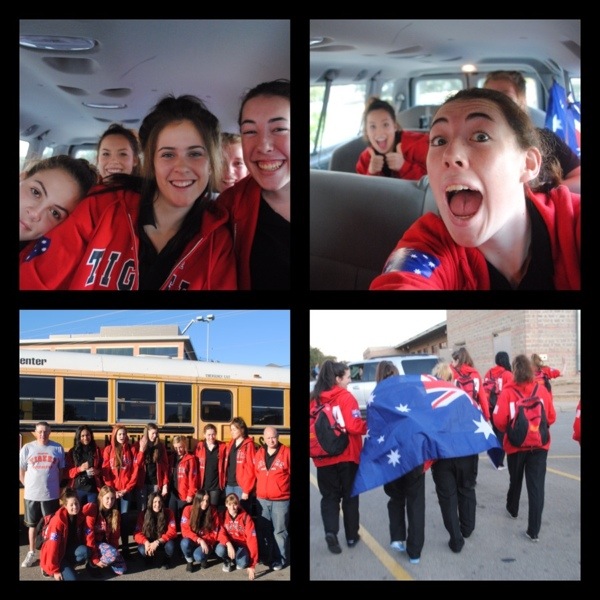 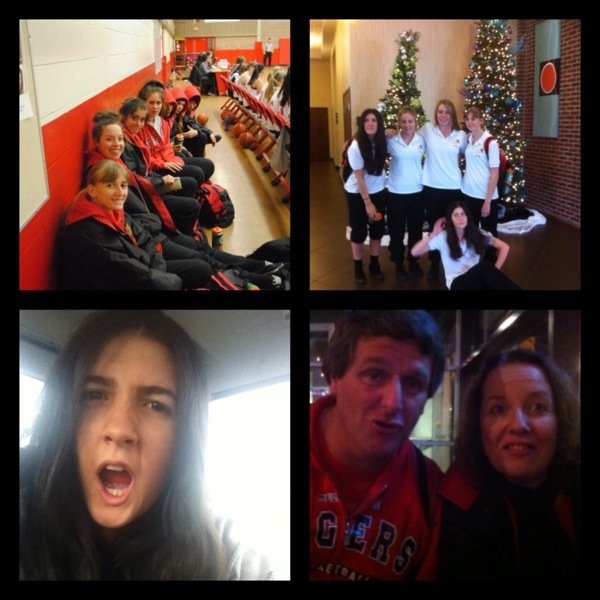 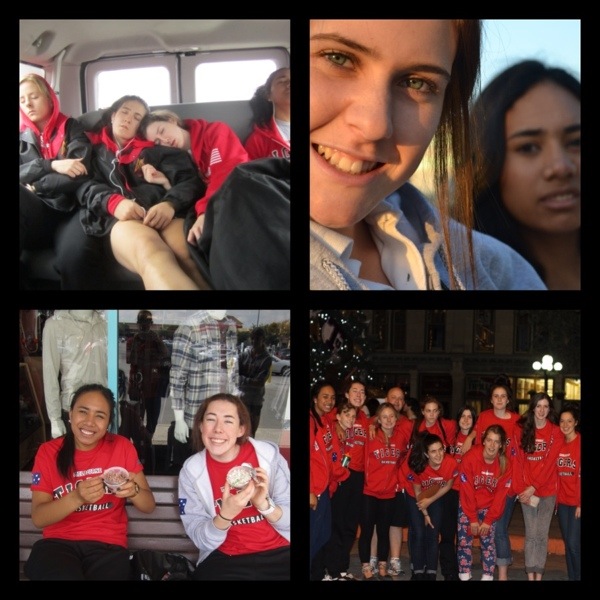 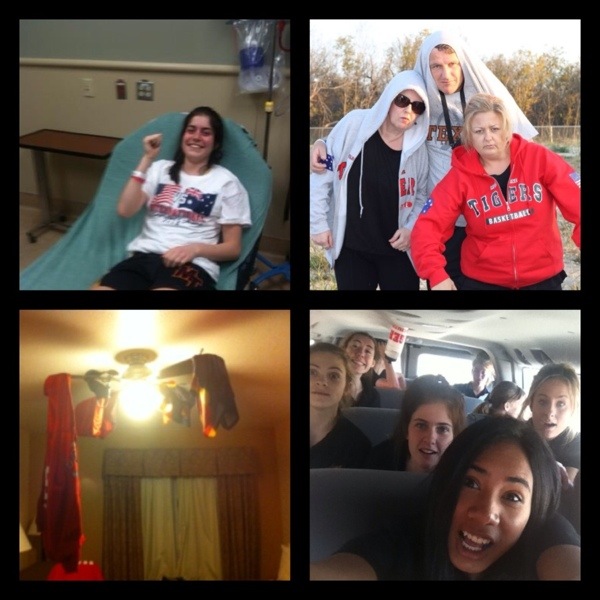 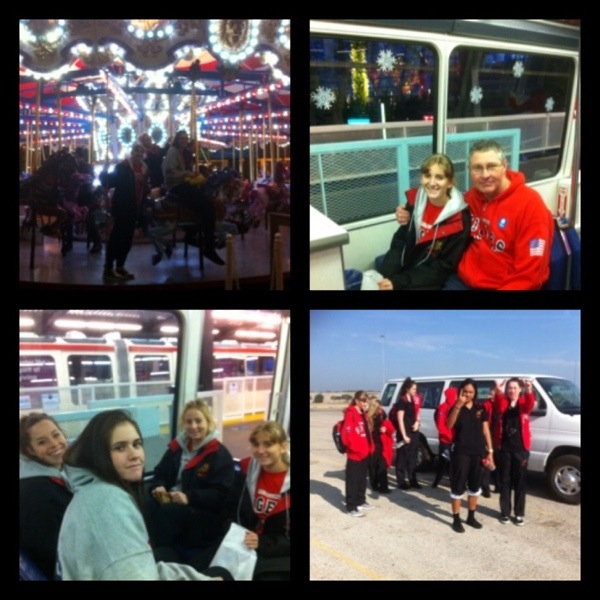 Friday December 14 saw us checking in at Four Points by Sheraton in downtown Seattle. We then walked to the EMP Museum and the Space Needle.
The girls were allowed a few hours to explore the area and spend time where they most wanted. Two groups went in and had a rock video clip made of their performance. ‘The Ruthless’ comprised of Phoebe on lead vocals, Shanara and Max on keyboards, Dajana on drums, Peri on lead guitar and special guest Matt on tambourine. They belted out ‘Wild Thing’ in true rock fashion. Then ‘Riot’ with Phoebe once again on vocals, Geraldine on lead guitar, Georgie on keyboards, Emily on tambourine and Adele on drums rocked out ‘I Love Rock’n’Roll’. For those interested – DVDs of the two performances were purchased. 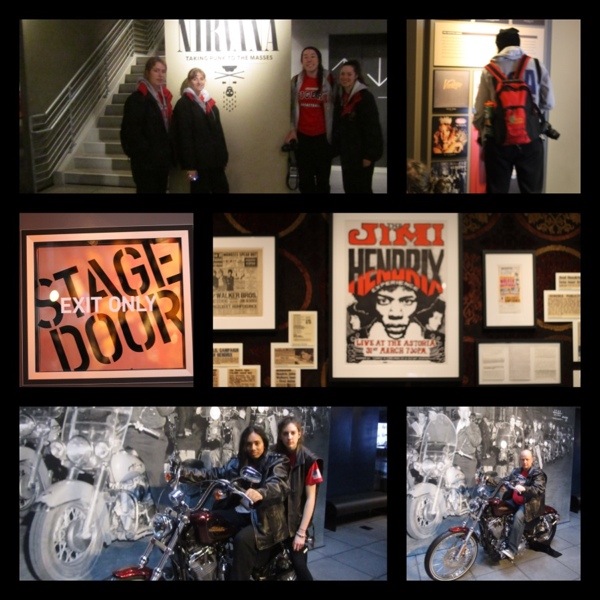 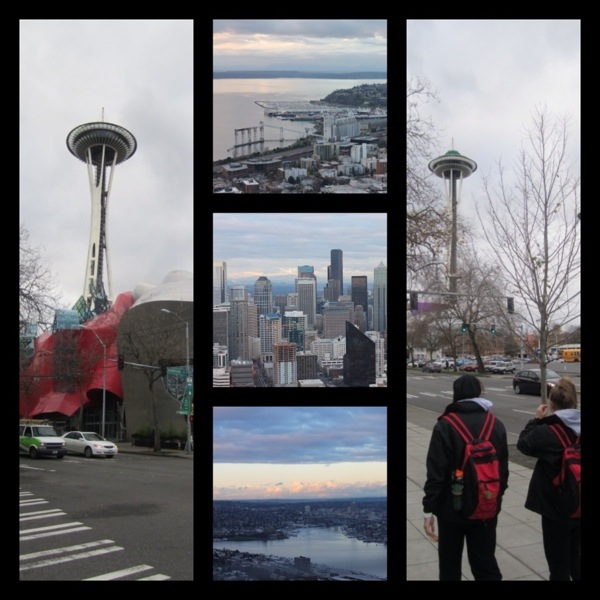 We then caught the Seattle Mono Rail into the downtown shopping precinct. The Christmas lights, the shopping, the carousel, the atmosphere. There was so much to absorb, explore and enjoy.

Thursday morning saw the five adults picking up the girls from Tigard High School at 11am. The girls enjoyed spending the morning ‘at school’ with Tigard basketball girls.

We then headed to Le Bistro Montage for a lunch of Po’ Boys, Jambalaya and their ‘World Famous Mac’.

We then walked over the Burnside Bridge and towards Old Town. The views were spectacular and a snowed covered Mount Hood looked stunning. We sought out the iconic Voodoo Doughnuts and all queued to buy one of their doughnut delights.

We then found our way on foot back to the vans via Morrison Bridge. A short drive over the border and we were checking-in at the Best Western in Vancouver, Washington.

That evening we headed to the Portland Trailblazers versus San Antonio Spurs game at the Rose Quarter. We arrived early, together with the boys from the South Western Pirates (Brisbane) and were fortunate to be allowed to watch the teams warm up. When Patty Mills came out we were all excited. A loud cheer from us of “Aussie Aussie Aussie!! Oi Oi Oi!” raised a grin from Patty as he was going through his shooting drill. He later came over and was generous with his time and signature. Unfortunately the Spurs went down 90 to the Trailblazers 98 but the atmosphere of the NBA game was unforgettable.

Another game in Oregon and a morning at school

After cooking us breakfast on Wednesday, Coach Lindsey took us to the Washington Square Shopping Center. The girls enjoyed a few hours of leisurely shopping and managed to buy some much wanted supplies.
That evening the girls had a game against the Tigard Tigers. It was another tough game but the Melbourne Tigers came away with a win – 33 to 44. 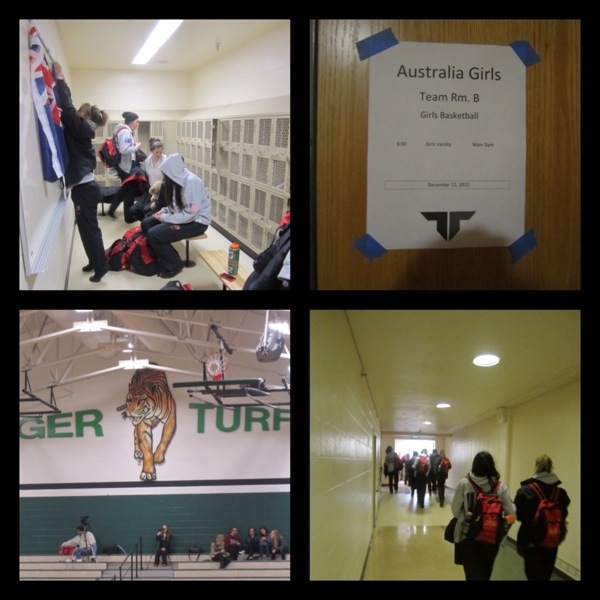 After the game both teams went to Big Al’s, Beaverton. We all enjoyed great food surrounded by huge sport screens playing various games. The Tigard coach generously paid for all our meals and our girls were then taken for home stays with some of the players and some teaching staff. 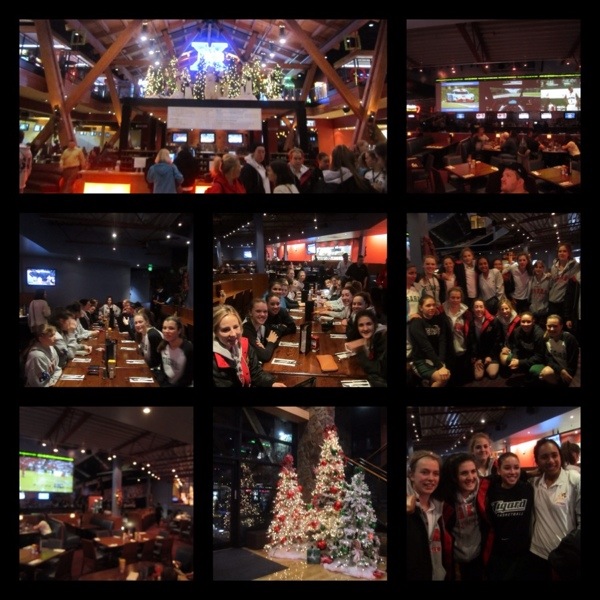